This is the kind of story that never gets old.

Daddy knew he needed to make a change.

To save his life and ours.

He moved all of us to a whole new life in another state. Far away from the drinking binges and the fighting and the rehab centers that didn’t work. Far away from what happened and what was……..to something good and better.

The convoy to our fresh start rolled out one early summer morning in 1982. As a preteen I was probably less annoyed than most kids my age would have been. I knew I’d miss my friends but I was ready for something better. The hope of a calmer life, a different house, and a new school filled my heart. Moving day was a good day.

My sisters and I weren’t the only ones at a new school. Part of Dad’s new life included seminary and he began the night courses eagerly. He took careful notes in class and squeezed study time in when he could.

I can’t remember the day or the month or the season, but before the end of the first year Dad started drinking again.

Mom was devastated. She never told me that, but I know. Dad was too. When you’re a kid you have no idea what your parents are going through. Then you grow up and endure your own heartaches and one day, without meaning to, you feel the pain of your mom’s fear or the torment of your dad’s struggle with alcohol.

I’m sure Daddy remembered the day he took his last drink. He may have counted the days but he never told us. After about a year of him not drinking……we realized he wasn’t drinking. Then it was two years, then five. Ten years sober, then 20 years.

Daddy was sober for almost 23 years when he passed away in 2014.

They won. Daddy and Mom pressed through and marched on. They fought the good fight and fought with each other. They messed up but moved forward. There were days they wanted to but they didn’t give up.

The long view is what got them through. The good days helped them see beyond the bad ones. When everything was falling apart they believed it could all come together. Love does that. It sees longer and deeper and wider. So my parents kept going. One day at a time. And they won.

The last time Daddy and Mom were face to face and held each others’ hands they weren’t thinking of the hard years. They were thankful for the moment and all the years that got them there.

Photo by Aaron Burden on Unsplash. 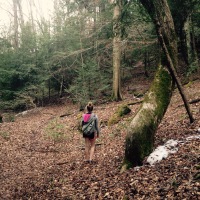